Start believing you can create more money, love and the life of your dreams using the law of attraction. This show is a positive, reality podcast that chronicles the journeys of those manifesting their deepest desires while stepping into their future selves, with the guidance of Law of Attraction and Money Manifesting Coach Cassie Parks. If you’ve ever asked, “Does the Law of Attraction really work?” this show has the answer.
Email RSS Feed Subscribe in Apple Podcasts
Manifesting Success Stories A Law of Attraction Show
2021
November
October
September
August
July
June
May
April
March
February
January

Everyday Jeanne has something amazing happening in her business. Strategy sessions, new clients, and getting to do the coaching work she was meant to do.

Jeanne Andrus is The Menopause Guru. She has all the knowledge. Really, she knows about symptoms (and how to fix them) caused my menopause most people have no clue have anything to do with menopause.

She is definitely smart enough to help clients.

The problem was, she couldn’t get clients. Well, she had a few randomly show up, but not enough to make a living off or in any way that gave her any assurance more would show up.

Jeanne is a self-proclaimed DIYer. It’s part of who she is. She likes to crawl under the house and fix the plumbing, because she can. DIY is great for somethings, but it didn’t help her when it came to marketing her business.

She tried it and it didn’t work.

Then she hired a coach, several actually because she was sure there was a magic bullet that would magically change everything. She thought it would all magically work if someone could just tell her which word to swap out in her email. That word would make someone hire her. (Nod your head  if you’ve been there.)

Jeanne admits deep down she did know that something was not connecting inside her.

In her coaching relationships she wanted to

Get patted on the head for doing it “right”

Only did about 25% of the actual work

One day our coaching relationship came to a head and I asked her to look at how much of “the work” I’d asked her to do, compared to how much she had actually done. On a scale of 1-10, she gave herself a 3.

In that moment she realized she wasn’t getting the results she was paying for because she wasn’t fully participating.

She also realized nothing else was going to change until she did the actual work, which also meant admitting she wasn’t perfect.

Listen to her how Jeanne has gone fully into our coaching relationship and is now growing and attracting faster than ever.

Jeanne Andrus is The Menopause Guru. Beginning with her own journey through menopause, Jeanne realized that women aren't prepared for the multitude of changes that happen to them as they go through this period of their lives.

Her work with women on their Menopausal Journey has led her to develop her own program of coaching - Menopause Mastery Coaching, which embraces the physical, emotional, mental, and spiritual changes of menopause.

When she's not coaching, speaking, or writing about menopause, she's loving her life in the Greater New Orleans area with her husband and pets, or off adventuring world-wide.  You can reach Jeanne at http://menopause.guru

Michele recently returned from a 9-day Caribbean cruise that her company paid for fully! She is leading her company is sales and is loving being fully present with people in her life. Gratitude overflows in her life.

Everyday Michele steps more into her power as a manifestor. This wasn’t always the case with Michele. In the not so distant past she was a business owner who used to work many hours, but had little to nothing to show for it every billing cycle.

So how is it that Michele has gone from a story title Never Enough to someone who has manifested over $100,000?

This doesn’t mean Michele’s past money story of survival doesn’t show up every once in a while. Listen to learn how she has gets herself back on track quicker and easier.

Recently, Michele took the Script Your Happily Ever After workshop, her biggest take away was that she speaks her truth and asks for and gets what she wants in life. This is applicable to all areas of her life.

She has realized there is this sexy, powerful side to showing up fully in life and communicating clearly.

Michele is a member of The Enchanted Circle. She has participated in the following:

Michele is a successful Mompreneur in the field of organic health. She helps men and women get healthy, fit and wealthy.

Her first round in Manifest $10K she manifested $20,000, more time and more freedom (check the archives to hear her interview).

Recently Maggie made the leap to full entrepreneur, leaving her job behind.

When there is a shift like that, things shift.

So, Maggie jumped into The Enchanted Circle to get support welcoming more money into her life and business.

While doing the Change Your Money Challenge, she had her biggest day ever in her business and manifested $2500 in new clients.

Her total manifested since joining the Enchanted Circle (less than 30 days ago at the time of this interview) is closing in on an additional $20,000. This is all flowing in from various sources, including a writing gig for a magazine that just appeared.


One of the things that makes Maggie a great manifestor is her commitment to the process.

During this interview we talked a lot about letting go of having to follow the rules and do things a certain way. If you have always been a rule follower check out this interview to learn how to shift that and improve your manifesting. 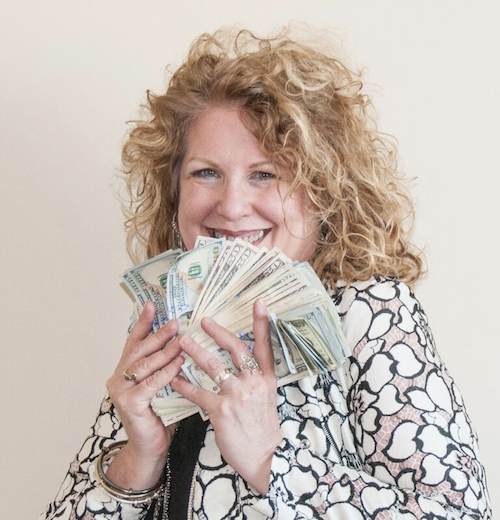 Maggie McReynolds is a longtime journalist, life coach, and the author of "Un-Settling," available on Amazon, and the upcoming "The Un-Settling Manifesto: The Unconventional Path to Financial, Emotional, and Social Freedom for Fed-Up Women," due out summer 2018. Founder of the Un-Settling online community and women's movement, she works with women in small groups online and through live workshops and retreats to stop settling for the lives they've been dealt and start creating the lives they want.

You can reach Maggie at http://iamunsettling.com.

This week Carrie-Ann didn’t really let anything bother her. She felt at peace and did what needed to be done. No resentment about cleaning the cat box or putting the dishes away. She simply did it. Life is easy.

She felt SO MUCH relief and such a sense of peace.

It wasn’t always like this. Six months ago, Carrie-Ann was worried a lot. She was resentful sometimes and she had a job that she did not like.

What changed? Doing the work to grow into someone different. She has completed two round of Manifest $10K + the Write Your Millionaire Money Story workshop. Working through two rounds of Manifest $10K laid the foundation for Carrie-Ann to attend the recent workshop where she was able to connect with her future self on a very deep level.

After attending the workshop, Carrie-Ann has a whole new outlook, even more positive than before, on life. She knows life can be easy and is living that way more and more each day. Her confidence is high because she knows her future self has gotten through anything that is in front of her and she’s laid out the path for her.

In the past, Carrie-Ann was one to do things and check them off a list. Give her a list of assignments and she’d get them done. What’s she’s learned is to take her time, go deeper and step into the experience on a daily basis.

She is making a conscious effort to create space for her future self to show up.

She is also continuing to deepen her trust in the process of growth and manifesting.

Listen to hear Carrie-Ann talk about how much of her and her life shifted in just three days.

This is the second interview with Carrie-Ann in the Year of Growth series. Follow her journey of stepping into her future self, growing and using the Law of Attraction throughout 2018.

Carrie Anne is married, with 3 cats, and is working a 9-5 job in Canada. She started this manifesting journey because she want a better life for us financially.You can reach Carrie-Ann at camyot@hotmail.com